I have started getting into aquariums lately and I absolutely love this hobby. Although there are a lot of things to earn, especially if you want a planted aquarium the looks truly amazing, I’ll get there. But today we’re going to talk about a problem that many beginners (and not only) have to deal with: algae. And particularly how to remove unwanted algae in your freshwater aquariums.

Although there are various bottles solutions that you can buy in pet shops in order to remove algae, these are usually frowned upon as they change the quality of water and harm your aquarium’s inhabitants. Instead, a better option (which is also way more fun) is adding algae eaters to your freshwater aquarium. And in today’s article, we’re listing the 10 best algae eaters that will help keep your aquarium clean and looking amazing.

I have already started using some of these fish and snails recommended below and I can say that their performance is absolutely spectacular. You will be really happy too, so let’s not waste a single second and let’s check out which are the 10 best algae eaters for aquariums:

This is by far the best known and best possible option out there when it comes to algae eating fish. The Siamese Algae Eater (usually referred to as SAE) is an extremely hardy fish – meaning that it will survive and thrive even in aquariums with non-optimal water levels. It also LOVES eating algae and keeping your plants clean, as well as cleaning all the debris in the tank (like sunken pellets that haven’t been eaten).

They are small fish, growing to a maximum of 2 inches long and are not aggressive. They do tend to get territorial though, so try to keep a maximum of 4-5 per 100 liters (26 gallons). I have 3 in my 30 gallon tank and they’re doing an amazing job!

When I bought my rainbow shark, I got it because I loved the way it looked. I had no idea that it’s going to turn into such an active algae eater. It spends the entire day cleaning the leaves of the plants and it’s an absolute joy for the eye (unlike the SAE which are not the most beautiful fish in the world). It also cleans up the tank of debris, eating leftover fish food.

The only problem with them is that they apparently tend to grow quite large over the years (up to 15 cm). I’ve also read reports that they lose interest in eating algae as they get older – but I can’t confirm that. All I know so far is that they are insanely active and I love them!

Another algae loving fish, this funky looking catfish grows up to 20cm so it can get really large. It might have compatibility issues with other fish (like the popular Cichlids or Barbs), but otherwise does really well in planted aquariums. These fish enjoy hardscaping elements like roots or anything wooden for them to blend in and they are not the most spectacular fish to have around. But they get the job done and that’s all that matters in the end, right?

One really popular algae eater is the Otocinclus Catfish, commonly known as the Oto. They love eating all sorts of algae and due to their smaller size, similar to that of SAE fish, they are great for all aquarium sizes and they do a great job when it comes to removing all type of algae in your planted tank, especially brown algae.

One potential inconvenient is that they are schooling fish, meaning that you should have a group of at least 5 in your aquarium for them to thrive. Also, they are not as hardy as the other fish listed here.

I absolutely love this fish! There are various breeds actually, but are extremely easy to spot as they are those who are always attached to the glass of the aquarium, with a huge mouth that always seem to suck in water and algae. They are highly effective and come in various sizes, so you can use them in larger or smaller aquariums. 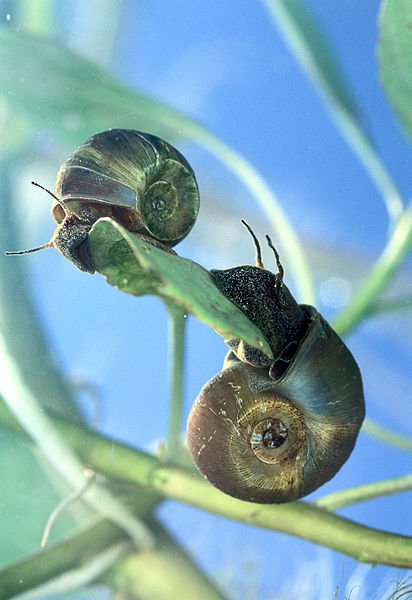 While many people consider these snails pests as they can easily fill up an entire aquarium quickly, they are also great for keeping your plants algae free. I think that the best way to keep them is to add a single snail to an aquarium. They won’t really make a difference in large tanks, but in smaller ones, they can easily keep a few plants free. I always have just one in my tanks and they never reproduced so far. This is strange as they are considered heterosexual snails, but I never had any problem over the years and I really love how good they are at keeping the algae away (and also cleaning other larger snails).

Also known as Zebra snails, these are really good algae eater which usually focus on the glass of the aquarium. The best part about them is that they are larger and rarely reproduce in tanks, so an infestation is very unlikely. They do a great job keeping the glass clean, but I haven’t really seen them on the plants.

However, they are extremely slow and highly unspectacular snails. But it’s better to have them than having no options at all! And they are beautiful thanks to their striped shells.

Small snails that can never be considered pests, the Malaysian Trumpet Snails are great algae eaters and thanks to their funky shells, they look really, really good in aquarium. Grab a few of those if you don’t really like the idea of Ramshorns invading your aquarium and you should be just fine. They also clean up debris, which is a welcome bonus.

Usually referred to simply as “Mystery Snails,” these are the beautiful and usually huge inhabitants of aquariums. They grow a lot if they have enough food and are a joy to watch. They also are very hardy and live a long life, so you can easily get attached to them.

Adding some shrimp to your aquarium offers great variety and amazing allies when it comes to fighting algae. The best part about most shrimp is that their bioload is considered to be close to zero, meaning that they produce a ton less waste than snails do. The best and easiest option here is the Red Cherry Shrimp (which also comes in various color varieties) or the Amano shrimp. But basically all shrimp will feast on algae and also add nice diversity to your tank.

I haven’t really seen mine clean the plants as much as the glass – but that’s probably because of its huge size that makes it virtually impossible for it to actually stay on the leaves.