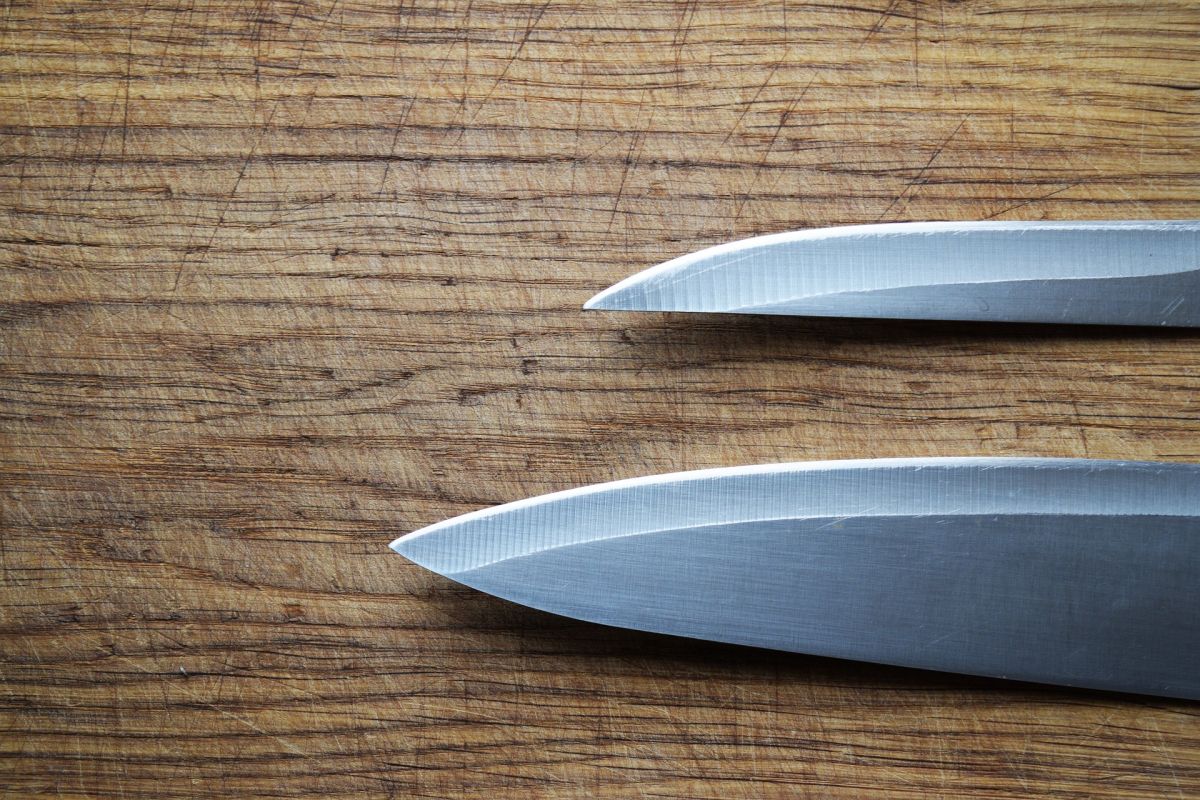 We’ve recently moved to a new place where we have a much smaller kitchen to deal with. While I do miss my old, huge kitchen, I am aware that this new one has everything we need to make it work. But being so compact with less counter, cabinet and drawer space, we need to optimize existing space as much as we can.

I try to keep things squirreled away to make the space cleaner, meaning our knives were kept in a knife organizer in one of the drawers in the old kitchen. I am keen on our knives being in the best shape possible, and having seen what those knife blocks that stay on your counter can do to the tip of your knives, I’ve kept away from them.

I was happy with the knife organizer in the drawer, but we have six drawers in our new kitchen, four of those being about eight inches wide and too thin to hold the organizer, and the other two being quite deep to hold our pots and pans.

So I had to think about something, and it quickly came to me: I had to get a magnetic knife strip in order to save space. It proved to be an amazing idea and I totally love it today.

And in this article, I will share with you a how to guide for the DIY Magnetic Knife Strip with no holes – Ikea type!

For more projects like this one, as well as various other guides that will make your life in the kitchen a lot easier, make sure to check out Kitchenly.com.

We decided on settling on the Grundtal from Ikea when we built it a while ago. Now, everything is simpler with this magnetic knife strip offering the full package and a very similar design.

Back to what I got for my kitchen, I already knew a bit of what I was going to do. I had seen some hacks of it online, from people using glue to stick it on the wall to people gluing two together back to back to hold their knives against the side of the refrigerator. So there were options!

However, it seems that Ikea had changed the look of the Grundtal since everyone who’s done a hack on it had posted their pictures on the internet. Thus I had no idea how I was going to hack it now, but I decided to give it a shot.

It was only $13 and I had no better alternative. I took it home, played with it, hurt some fingers (they put a LOT of strong magnets, so be careful, it is not something for little kids to play with as I felt that I was playing with death).

After making some trips to Home Depot and Michael’s, I settled on filling the back cavity with wood. I wanted the back side to be flat so that I could use the 3M Contact strips to adhere the knife rack to the wall.

I’ve used 3M Contact strips for other things around the house and I concluded sticking a bunch of 3M Contact strips to the back of my modified knife strip would be sufficient. Spoiler alert: IT WAS and they’re still holding!

WARNING: This probably will not seem safe to some people. I’ve thought up different ways to go about achieving the desired results (magnetic knife rack, mounted on wall, without drilling or permanent damage), but I didn’t have much space and this seemed the best way to achieve those results.

That said, if I had kids, I would not have used this method, I probably would’ve gotten a knife block. However, I think my risks were calculated, and I’ll go into it more below. In our case, it’s been several months and no problems… but proceed at your own risk.

Or, even better, check out our list of the best Magnetic Knife Holders here and buy a readily-made one for top prices. It’s really the easiest way if you’re not a DIY nut like me.

Materials required for the DIY Magnetic Knife Strip with no holes

– Magnetic Knife Strip (like this one)
– 3M Command Mounting Strips – this pack here will work well
– E-6000 Glue or any other glue that will bond to metal and to wood
– Wood pieces – I got wood pieces from Michael’s, brand ArtMinds. Each piece measured .1in x 1.1 in x 11 in.
– Optional – Gloss Spray Paint

Ignore the small circular pieces and carefully put the wall mount piece, piece #2, in piece #1, with the bump facing outside.

Piece #1 is lined with strong magnets, so they will snap together quickly. Don’t get your fingers stuck in between because it will hurt – I have first hand experience with that!

Before I glued the wood pieces in, I spray painted them with clear gloss. I used clear pine craft wood and the surface was a bit rough and soft. I decided to give it a harder surface with the clear gloss, but you could use also use lacquer.

Put E-6000 all over the inside. Press the wood into metal piece and let dry.

When it dried a bit, but was still soft, I turned it over and let it dry upside down on some papers. This was to ensure the wood was flush with the top.

After the glue has dried, stick the 3M strips according to the instructions on the package. Of course I forgot to take a photo of this part, but I’ve marked up the photo below to show you how I stuck them on. You can put more to be extra safe, but those four spots are enough based on my own experience.

Tabs should stick out so you can remove the knife strip later. Four pairs hold 16 pounds, so you should really have no problem with this setup. I didn’t!

I’ve used the 3M hooks in the past with great success, so I went for it, certain that it will work.

As I’ve said earlier, it’s been up for several months now and I haven’t had any problems with it, just a clean counter! So if you want to take on a weekend project (or more like a few hours-project), give it a try!

It’s easier than it is to drill holes and it is just as beautiful and safe. I personally like it and I hope you do too.