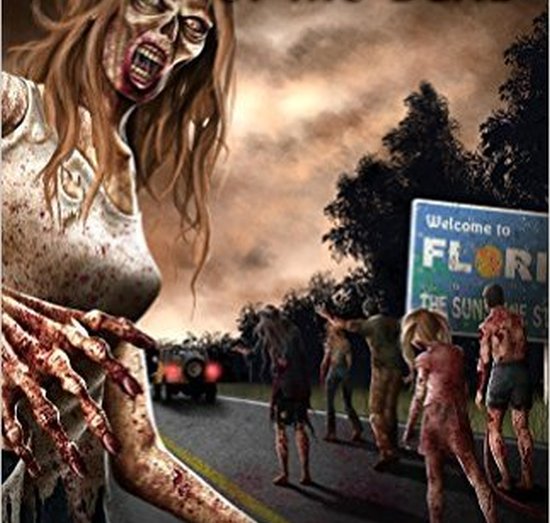 You probably know already that I am an avid consumer of this not-so-popular niche in the post-apocalyptic/horror genre as I have already shared with you my favorite new zombie books of 2015 last year. But since you can never have too much zombie literature, I have decided to do a similar thing this year and recommend 13 outstanding new zombie books to read in 2016.

By “new books” I mean novels that have not only been published in 2016, but that are also not part of a series (or at least not an existing series, since some of the books on this list, even though standalone, could mark the beginning of a nice post apocalyptic series eventually).

UPDATE: The list of the best new zombie books of 2017 has also been published here on Ranking Squad and we have some great titles there as well. Make sure to check it out here! And now we have the 2018 list published as well.

They are all fun for fans of the genre (I loved them all!) and some even come with interesting and actually unique concepts and ideas so I highly recommend reading these great zombie novels of 2016, even by those who are not necessarily fans of the zombie genre.

Now let’s not waste any time and let’s check out the titles below. To make things even easier, we have a table below listing the author and book title, plus a link to check them out. Or you can scroll down to find out more about each book and see their covers as well.

Below you can find more details about each of the books listed above.

A well known author of great zombie fiction, Nicholas Ryan comes with a brand new standalone thriller that you can’t help but love. A drifter in a savage wasteland, up against the evil that has risen from the ashes of the zombie apocalypse. In a brutal unforgiving world one man will be called upon to take up a fight to save those who remain. He thought his last war had been fought in the trenches against the zombie hordes. Now there is one more bloody battle that must be won. But the enemy is no longer undead, it is much worse than that..

Zombies vs. Cavemen. Gash-Eye already thought life was hard, as the Neanderthal slave to a band of Cro-Magnons. Then zombies attacked, wiping out nearly everyone she knows and separating her from the Jaw, her half-breed son. Now she fights to keep the last remnants of her former captors alive. Meanwhile, the Jaw and his father try to survive as they maneuver the zombie-infested landscape alongside time-travelers from thirty thousand years in the future… I’ve rarely stumbled upon something as original as this and, as crazy as it might sound, the result is absolutely jaw-dropping. You will love it!

The first ZomPoc novel from Ricky Fleet takes us away from the US all the way to the UK, where weapons are not as common and people have to be very inventive when it comes to staying alive. Kurt Taylor, a self-employed plumber, witnesses the start of the horrifying outbreak. Desperate to reach his family before they fall victim to the ever growing horde of shambling corruption, he flees the scene, watching the unfolding cannibalism and destruction in his rear view mirror. A great read that sometimes makes you think that you’re reading a zombie novel by George RR Martin.

Jessica Cooper, ex-military, has been recovering from extreme Post Traumatic Stress Disorder as a voluntary inmate at ‘Golden Glades’ Mental Health Facility. When the outside world turns into chaos, in the grip of a pandemic, it’s only a matter of time before the safety of ‘Golden Glades’ is breached. If only it had been zombies, at least you can out run them, but this outbreak twists the very nature of humanity to create a lethal enemy. Follow Jessica’s progress in an apocalyptic drama to find if her family has survived the worldwide pandemic. Be prepared for a graphic struggle in a very hostile world – something you’ll love from start to finish!

Born In The Apocalypse – Joseph Talluto

Abandoned houses. Burned out businesses. Towns overrun. Dead bodies left to rot where they fell. Hordes of the infected roaming the land, killing anyone they find. Survivors huddled behind walls, trying to scratch out an existence in a world turned upside down. Walled in to preserve the remnants of the country, Josh and his friend Trey deal with growing up in a world that will literally tear them apart if they make a mistake. But that’s the price they have to pay for being born in the apocalypse.

You probably know Joseph Talluto already as he has published several other great zombie novels, including the great White Flag series, so you know you’re up for a treat. Even though I personally prefer zombie novels that happen during the beginning of the apocalypse and not way after it happened, I can’t stay away from a good book and that’s exactly what we get here!

Rise of the Dead – Jeremy Dyson

The debut novel of Jeremy Dyson announces the birth of an upcoming fan favorite zombie fiction writer. Mark my words! Here’s what this great, fast-paced book is all about:

Blake was never one for taking chances. He lived in a world of formulas and equations. A statistician in a controlled world where everything had become predictably mundane. That world disappeared the day the dead got up and began attacking the living. Now, the end is here. Blake finds himself thrust among other unlikely survivors. Together they must adapt to the realities of the undead world, or join the legion of zombies. The characters must overcome their conditioned human apathy and come together if they have any chance of survival.

As civil war erupts and people rip each other apart in the streets of the African capital, a disinterested public across the globe turns the channel. They should have prepared accordingly. A highly contagious microbe is spreading unchecked through the streets killing everyone in its wake only to bring them back again as the ravenous undead. Only a lone CDC virologist understands the extent of the outbreak at hand. He cowers amongst the embassy staff praying for extraction from the hands of death, fearing his part to play in the epidemic. An easy read and a lovely thrill ride for the fans of the genre!

Another great debut novel, Origin Z comes with a fresh take on the genre: When molecular biologist Tina “Teeny” Lisandro’s father is stricken with MD, she makes a promise to help him. And while working in a lab she discovers a cure—immunity to diseases as a result of a splice between a human gene and one belonging to a rare salamander. It doesn’t just boost the immune systems of the healthy—it repairs the damaged cells of those who are already ill. As the world’s overall health improves with the spread of the “Axola Flu” and disease is all but eradicated, the medical community flounders, forcing doctors and nurses into the unemployment lines. But the most extraordinary medical breakthrough the world has ever seen could mean the death of the human race…

Brad McCoy is a survivor, and a cynical bastard. He lived through the bloody first few months of the zombie rising and lost everything he cared about before finding his place in this new, terrible world. He fights alone, exterminating the hungry dead, and he is okay as long as he is doing the job. He is an exterminator, and instead of ants in the pantry or raccoons in the attic, he eradicates zombies and he’s damned good at it. He thinks the dead hold no surprises for him anymore, and he must only truly fear the living. Unfortunately for Brad, and the rest of the living population, he is wrong…

This amazing novel was started by a short story (Hunger Driven, which is also included) that was so great that the public simply deserved more. And they got it now – you’ll love this book!

After the collapse of the United States Government and the rule of law is abandoned, the SURVinc. community is forced to confront enemies, both foreign and domestic, in an ongoing battle between survival and extinction where cutthroat tactics, predatory instincts and vigilante justice challenge the character of even the most honorable among them. Will the citizens of SURVinc. be able to ensure their own mutual survival and not only survive, but thrive? You probably know the answer already, but it will be a great read!

A mysterious virus has swept the globe and brought the dead back to life. Two survivors travel across the wastelands of the United States, in search of the men and women responsible for creating the plague that destroyed the world. A journey that will take them across a terrifying apocalyptic landscape filled with the mindless dead to a stronghold known as Concordia. When you’re talking about an author whose work is influenced by Chuck Palahniuk and Stephen King, you know you’re up for a treat.

In my opinion, Goudsward is not getting the attention he deserves and hopefully after this list is published, he will. Here’s what Fountain of the Dead is all about: Living in a fortified cul-de-sac in the shadow of Boston a group of refugees have etched out their survival. At times they’re not sure who to fear more; the zombies wandering the streets or the power mad “controller” of Boston, Richard Crenshaw. Until the day a crazed environmentalist shows up at the gates with promises of “the cure” disrupting their lives. With a handful of volunteers, Catherine sets off with her team to follow the half-mad scientist to Florida to where he believes the cure for the zombie plague exists. When they arrive in the swamp they are greeted by unexpected horrors both human and inhuman.

A great old school zombie story, a post-apocalyptic, zombie infested road trip that you will absolutely enjoy: click here to get this book now!

I know that I said there would be no books that are part of an existing series and I hitting you with the 7th in the The Undead World Series… but it’s Peter Meredith we’re talking about and an absolutely amazing zombie series overall, so you really have to read this (and all the previous ones) if you love the zombie genre. This book had to be on my list of the best zombie books to read in 2016!

The people of the Estes Valley have found their peace destroyed as they are attacked by the single greatest army left in the world. Not only do they have to contend with an army of men equipped with the latest hi-tech military gear, they also have to battle a horde of undead half a million strong. But, perhaps worse that all of this, they have to deal with a seven year old girl—Jillybean. Cruelly coerced into helping her enemies, Jillybean bends her mind to the destruction of the valley, the death of kings and the loss of her own soul, and when Jillybean puts her mind to something there’s no saving it, ever.

And these would be my recommendations – 13 amazing zombie novels launched in 2016 that you must read. Enjoy!