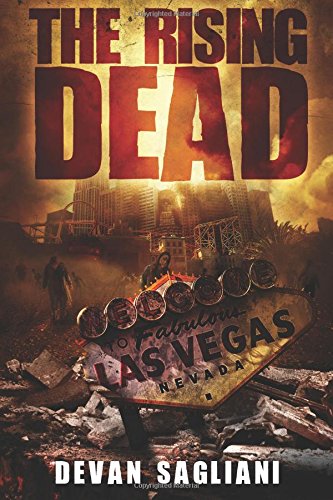 Zombies and literature don’t really mix and match and the truth is that there are very, very few outstandingly good zombie books out there. However, if you are like me, you don’t expect to read zombie novels from Nobel-winning writers: you read them because they are entertaining, easy to go through, generally insane in a gory way and… well… because you like zombies!

Even though this is a pretty obscure niche in the post-apocalyptic and horror genre, it still manages to produce tens – if not hundreds – of new novels each year. And since they are getting better and better, we have decided to choose for you 15 new zombie books to read in 2015. The best new books, in our opinion. So let’s not waste time and let’s feed our brains with some high quality zombie literature!

UPDATE: Scroll to the bottom of this article to find links to more recent must reads in the zombie literature genre!

The tattooed plus sign on Finnegan’s hand marks him as a Positive. At any time, the zombie virus could explode in his body, turning him from a rational human into a ravenous monster. His only chance of a normal life is to survive the last two years of the potential incubation period. If he reaches his twenty-first birthday without an incident, he’ll be cleared. An interesting take on the zombie genre!

Hunter already has enough horrors in his head after suffering years of combat in the Airborne Infantry. But nothing he’s seen can prepare him for what he’s about to encounter: Hunter will put his training to the test when he confronts the undead. After seeing a gruesome zombie attack on TV, he quickly discovers that the danger lurks right outside his front door. He must swing into action in a hurry if he doesn’t want to be dinner…

Those Who Are Left – Josh Stricklin

An apocalyptic tale that surprises you with humor when it’s not terrifying you with horror, Those Who Are Left follows Derrick as he and two strangers venture through the major cities of the South in search of family and safety. But not all the human factions can be trusted, and if the trio can’t figure out what’s driving the different groups they could end up with enemies on all sides. A great read for fans of Stephen King, Neil Gaiman, and Dean Koontz.

The United States of America is falling before the armies of the dead. Leading the sole survivors of the US Army’s 10th Mountain Division out of the overrun city of New York, Captain Phil Hastings heads for the safety of Fort Indiantown Gap, a National Guard training facility deep in the woodlands of Pennsylvania. Joining with other remnants of the military, government, and civilian communities, Hastings and his men must try to keep the tsunami of corpses from taking over the world and plan the resurrection of the nation.

The nations of the world already in serious economic decline must turn to heavy police and military deployment to protect civilian lives and maintain law and order. A drug is designed and distributed to save lives and causes the near destruction of the human race. This book focuses on the actions of Eddie, his family, and his friends during and after the collapse of society and the people they encounter that have either nothing or everything left to lose.

The Other Side – A.S. Thompson

This is book 3 in the Longest Road series, following the survival adventures of a group of friends in a world plagued by the zombie apocalypse. Now, driven by the knowledge of a global conspiracy, those remaining have chosen a side. The risks are grave, and the price of failure may be worse than death, but together they fight, facing the daunting task of preventing a catastrophic future of irreversible repercussions. While the daring epic comes to an explosive end, find out what happens on… The Other Side.

What starts off as a fun day at the zoo for John and his young daughter Fi quickly turns into a waking nightmare. Now they and a small group of survivors are fighting for their lives against a pack of animals that seem somehow altered. Was it nature or man who altered them? In a top secret research facility in Texas lies the answer. But will the scientists and soldiers find the answer before it’s too late and the infection spreads to Man? No one is safe from the hunger that grows inside!

An interesting take on the zombie genre – make sure to check it out here!

Awakening to a nightmare, Dan Foster is forced to flee his suburban Chicago home. Together with his wife Abby and little girl Katie, they begin a dangerous trek across the wintery Midwest in hopes to reconnect with his brother in the heartland of Wisconsin. Dan soon discovers the ravenous hordes of undead are not the only things out there that threaten the lives of his family. Can he stay the man he is, or will he need to become something more dangerous in order to protect the ones he loves?

Lost World, the fourth book in the Broken World series, continues following a group of survivors after a super-virus has destroyed the world and the dead have come back to claim it as their own… You do have to read the first books in the series, but it’s well worth it!

The Beginning of the End – Sean Kidd

With millions of people being wiped out by a modern plague, the Government secretly creates a cure. Devastating side effects of the serum, have a catastrophic effect on civilization. Disease ridden masses are turning into walking dead. Two unlikely heroes find themselves in the beginning of a zombie apocalypse, where the dead are feeding, and the living are collecting the weaker for their torturous pleasure. With our heroes battling on two different fronts, and hope for mankind rapidly diminishing, this may truly be the beginning of the end.

When 16 year old Xander’s older brother Moto left him at Vandenberg Airforce Base he only had one request – don’t leave no matter what. But there was no way he could have known that one day zombies would gather into groups big enough to knock down walls and take out entire buildings full of people.

After a contagion engulfs humanity, zombies rise to feast on the few survivors that are left. But they are not the worst monsters to come from this plague. There is hope, though. Christian Hunt is immune. But how many lives will it take to bring his gift to what’s left of mankind?

The dead are walking, and they’re hungry. Steven Jenkins, bestselling author of Fourteen Days and Burn The Dead, shares six zombie tales that are rotten for all the right reasons. Six different takes on the undead, from the grotesque to the downright terrifying. But reader beware: as the groans get louder and the twitching starts, you’ll be dying to reach the final page.

Click here to check it out (it’s free on Kindle at the moment of writing!)

Two years after the New York outbreak in Medora, masked terrorists unleash the undead at a mall in Mexico City. Infected bodies fall from unmarked planes over D.C., Seoul and Jerusalem. A terrorist leader, known only as The Sirr, claims responsibility as he rises up with his brotherhood to cleanse mankind with the nanovirus scourge. The fate of the world depends on an elite infectious operations team and one CIA operative whose loyalties have blurred. As the military defends the world with electromagnetic weapons, they soon discover the enemy’s secret: the undead have evolved. Welcome to The Medora Wars: die today, fight tomorrow.

Chaos breaks out when a virulent new strain of biological warfare is unwittingly released into the general population, causing all who are infected with it to turn into flesh hungry monsters driven by a hive mind that yearns to feed.

There you have it! Some great books that should quench your thirst for zombies and the end of the world as we know it!

UPDATE: As I said, I have also published my list for 2016. Click here to check out some more amazing zombie novels! You can also check out the best new zombie books of 2018 here.